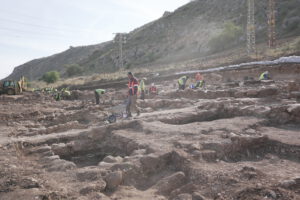 This is the first time that two synagogues from the Second Temple period have been found in the same locale. Dina Avshalom-Gorni of the University of Haifa, one of the directors of the excavations: “The discovery of a second synagogue in this Galilean settlement casts light on the social and religious lives of the Jews in the area in this period, and reflects a need for a dedicated building for Torah reading and study and for social gatherings.”

A 2000-year-old synagogue from the Second Temple period was recently discovered in Migdal, a large Jewish settlement from this period. Migdal served as the main base for Yosef Ben Matityahu (Flavius Josephus) in his war against the Romans in the Galilee during the Great Revolt. This is the first time that two synagogues have been found in a single settlement from the Second Temple period, the time when Jesus of Nazareth was active.

“The discovery of a second synagogue in this Galilean settlement casts light on the social and religious lives of the Jews in the area in this period, and reflects a need for a dedicated building for Torah reading and study and for social gatherings. We can imagine Mary Magdalene and her family coming to the synagogue here, along with other residents of Migdal, to participate in religious and communal events. The exposure of a second synagogue casts new light on Jewish communal life in the Galilee, the area where, according to the New Testament, Jesus performed his miracles,” commented Dina Avshalom-Gorni, one of the directors of the excavations.

The archeological excavations at the site are being conducted by Y.G. Contractual Archeology Ltd., headed by Yehuda Govrin, and under the academic auspices of the Zinman Institute of Archaeology at the University of Haifa. The excavations are being conducted in accordance with a tender issued by Netivei Israel in the format of a salvage excavation as part of the expansion of Route 90 (Migdal intersection).

Situated on the northwest shore of the Sea of Galilee, Migdal was a large Jewish settlement 2000 years ago. Following the destruction of the Second Temple, it served Flavius Josephus as his main base in his war against the Romans in the Galilee. Migdal is also mentioned in Christian texts as the birthplace of Mary Magdalene, a prominent supporter of Jesus who is known as “the apostle to the apostles.”

The eastern side of Migdal was excavated over a decade ago by the Israel Antiquities Authority. A synagogue discovered at the time was also dated to the Second Temple period. A unique stone was uncovered in the center of the synagogue bearing a relief of a seven-branched candelabra (Menorah); the excavators suggest that the artist who created the relief was replicating the Menorah positioned in the Temple. The stone is currently on display in an exhibition of the Israel Antiquities Authority at Yigal Allon House.

The newly-excavated synagogue is a broad, square-shaped building constructed from basalt and limestone. It comprises a central hall and two additional rooms. The walls of the central hall are coated with white and colored plaster. A stone bench, also coated in plaster, runs along the walls. In a small room on the south side of the hall, a plaster-coated stone shelf was found; the room may have been used to store scrolls.

The building uncovered in the 2009 excavations was the first synagogue from the Second Temple period found in the Galilee, and the ninth in the entire country. Now, as noted, a second synagogue has been found in the same settlement. Prof. Adi Erlich, head of the Zinman Institute of archaeology at the University of Haifa says: “The fact that we have found two synagogues shows that the Jews of the Second Temple period were looking for a place for religious, and perhaps also social, gatherings. The stone bearing a relief of the Menorah from the other synagogue at Migdal, suggests that the local Jews saw Jerusalem as their religious center, and their local activities took place under this centrality. The synagogue we are excavating now is close to the residential street, whereas the one excavated in 2009 was surrounding by an industrial area. Thus the local synagogues were constructed within the social fabric of the settlement.”

Shai Klartag of Netivei Israel adds: “The safety project we in Netivei Israel are undertaking here at Migdal Intersection will play an important role in saving lives and preventing road accidents. As someone who has been an engineer for many years, I am proud that thanks to the current and future projects of Netivei Israel we are privileged to uncover amazing findings like this from the splendid past of the Land of Israel.” Dr. Yehuda Govrin adds that all those involved intend to ensure that the synagogue is preserved on the site and will be accessible to visitors, subject to coordination with the authorities.