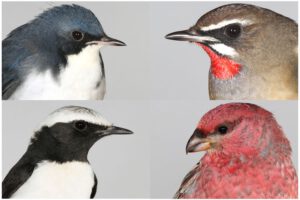 Do males set fashion trends while females pay the price? A new study published in the Journal of Evolutionary Biology examined over 80 species of songbirds and found that the more colorful the species, the less feathers are replaced by the males in the first moult after leaving the nest. Conversely, among the females of the same species it was found that their coloration has no influence on molting, and they molt according to the coloration of the males.

Feathers are one of the most important characteristics of birds. They provide protection and influence the appearance of the bird; accordingly, they may have an impact on visual communication and camouflage. Once a feather reaches its full size, it becomes a dead tissue that is nonetheless firmly attached to the body. Over time, feathers get worn and consequently, to ensure their proper functioning, the bird must shed the old and worn feather and grow a new one in its place. Young birds leave the nest with the feathers they were hatched with, which are of poor quality, and accordingly these are quickly replaced by higher-quality feathers. The replacement of the first feathers that grew in the nest usually takes place one to three months after the birds leave the nest.

Young songbirds from colorful species usually begin their lives with dull feathers that usually resemble those of adult female birds. These feathers are replaced to more colorful feathers and an extensive replacement of these feathers could have advantages, specifically in attracting opposite-sex partners during mating. Yet, it also comes with a price: the more extensive the birds replace their plain feathers with new colorful ones, the more exposed they will be to aggression from other birds. “Colorful feathers symbolize maturity. A mature bird is exposed to aggressive behavior by other birds. Moreover, the more colorful a bird is, the more exposed it is to predators,” the researchers explained.

Accordingly, in the current study doctoral student Yosef Kiat and Prof. Nir Sapir, the head of the Animal Flight Laboratory at the Department of Evolutionary and Environmental Biology, sought to examine the extent of feather replacement in young songbirds that include colorful, as well as more duller species. The researchers collected data through fieldwork and from nine museums in Israel and Europe that hold collections of vouchered songbirds (the largest and most colorful group of birds). A total of more than 8,000 young birds from 83 different species of songbirds were examined.

The results of the study showed that the more colorful the species, the less feathers were replaced by the young males during the first moult, by comparison to less colorful species. In other words, in the first moult the bird acquires coloration only to a very partial extent (the feathers that are not replaced in this phase tend to be plainer, usually in shades of brown-gray). The researchers explain that the implication is that the benefits of moulting into a more colorful bird are outweighed by the costs of this process, resulting in a relatively dull appearance and facing fewer aggression from adult birds. Less colorful birds, by contrast, replaced far more feathers in this stage of life.