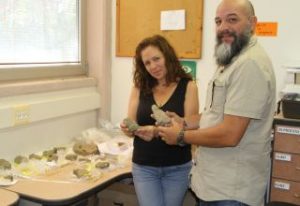 The secret of a collection of mysterious art objects from Puerto Rico, which in the past were alleged to have been made by members of the Ten Lost Tribes, has moved a step closer to a solution. Dr. Iris Groman-Yaroslavsky examined the objects in depth at her laboratory. Her findings confirmed that the objects were carved in the sixteenth century, and are not a modern forgery, and she also discovered evidence showing that some of the objects were coated in gold and in red paint. “This is definitely one of the strangest and most fascinating stories I’ve been involved in,” Dr. Groman-Yaroslavsky confessed. “To date, we have not found any similar carved stone art objects from this region of America, and this is why many researchers assumed that they must be fake. However, the microscopic tests we performed show beyond any doubt that the stones were carved around 600 years ago.”

The story of these art objects, known as the Library of Agüeybaná, sounds like the plot of an Indiana Jones movie. In the nineteenth century, a Puerto Rican monk by the name of José María Nazario presented a collection of some 800 carved stone statuettes, some of which had a clearly human form while others appeared to be artistic or ritual items. Many of the statuettes were engraved with markings that can only be some form of writing. The problem is that no similar statuettes or art objects have ever been found from this region of America, and there is no evidence at all of any writing system in the other pre-Columbian cultures of the region. The markings bore no resemblance to the writing systems developed by the Aztecs or Mayans. The story as told by the monk Nazario himself is no less bizarre: An old woman close to death invited him to her hut in the mountains, and there she told him of a treasure her family had been guarding for centuries that had belonged to the ancient inhabitants of the area. She gave him detailed instructions as to where the treasure was buried. Nazario followed her instructions and headed deep into the mountains, eventually reaching a pit covered by a large stone, just as the woman had told him. When he removed the stone, he found hundreds of statuettes. As a religious man, his explanation was that these were art objects made my members of the Ten Lost Tribes, who must have reached Puerto Rico after traveling across Siberia.

Over the years that followed, different researchers raised various suggestions about the stones and the engravings they bear. Some suggested that while some of the stones are authentic, others were forged by local people in the nineteenth century when they saw the great interest the statuettes had created. Other scholars claimed that all the statuettes are forged, and were probably made by Nazario himself, or by others. There was no agreement regarding the engravings, either: some experts claimed that the writing system was similar to Sumerian, others felt it was closer to Phoenician, and so forth.

The absence of any similar findings makes it particularly difficult to prove or disprove the authenticity of the statuettes, and as a result researchers gradually lost interest in the collection. In 2001, however, a research student called Reniel Rodríguez Ramos saw the stones during a study trip and was enchanted. He completed his doctorate in pre-Columbian cultures and returned to investigate the stones. “I decided to study the stones from scratch – to come to a ‘clean slate’ without any assumptions about whether they are real or fake, and to let the findings talk,” he explained. Rodríguez noted that even at first glance it was clear that the stones were several centuries old. Many of them showed changes in color on one side only, showing that one side had been buried in the ground while the other was exposed to air and sunlight, causing its color to change. But it could still be suggested that while the stones themselves were ancient, the engravings and carvings were only added in the nineteenth century.

After a long search, Rodríguez came to Dr. Groman-Yaroslavsky’s Use-wear Analysis Laboratory. The unusual laboratory specializes in microscopic examinations revealing how various objects were made, what tools were used, whether the techniques and tools are ancient, and so forth. The microscopic tests undertaken by Dr. Groman-Yaroslavsky showed unequivocally that the stones were carved in ancient times. “Under the microscope, we can see the erosion of the stones and the brown-gray patina that is typically found when items have been buried or exposed to the ravages of nature for extensive periods. The items are made from a mineral that was originally a greenish black, but the erosion covers the engravings across the entire item, and there is no evidence of any modern manipulation that would have exposed the natural surface of the mineral,” she explains. “The processing marks on the items show that special chiseling tools were used, and all the items appear to share a unique style.” However, the analysis also revealed something that Dr. Rodríguez had not been expected: remnants of gold that appears to have coated some of the items. This reinforces still further the hypothesis that the items were used in ancient worship. Remnants were also found of a red paint that covered parts of the eyes and mouth in the figures, reflecting a complex process of design and finishing. Gold and ochre mines can be found in Puerto Rico, and there is extensive evidence regarding the use of these minerals in ritual contexts. The association with ritual activity became even more apparent when the facial design details were examined. “The items were clearly struck with a solid object, since we can see deliberate destruction around the nose and chin.”

In light of the new findings uncovered at the University, Prof. Rodríguez is now continuing his quest to unravel the secret of the statuettes. His next port of call will be an expert in the ancient writing systems of pre-Columbian America. A long journey lies ahead, but with each step Rodríguez is drawing closer to his conclusion: the existence of a previously unknown pre-Columbian civilization waiting to be uncovered.